Noble is currently in North Carolina for IPO training, this weekend he took a "break" and went to a weight pull competition with my great friend Erica.

He did great for his first time out and to top it off, this was his first time being handled by Erica, such a great tribute to Noble's great temperament and drive! 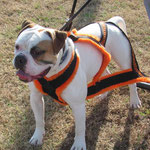 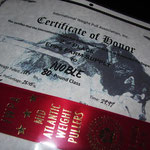 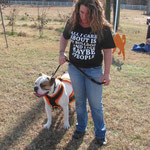 Made our way to North Carolina once again in November and brought back many wins to Canada!

Bully Rascalz Bronco was the superstar of the weekend winning all 3 BEST IN SHOW CHAMPION RINGS AND BEST OF BREED! Bronco is now GRAND CHAMPION! 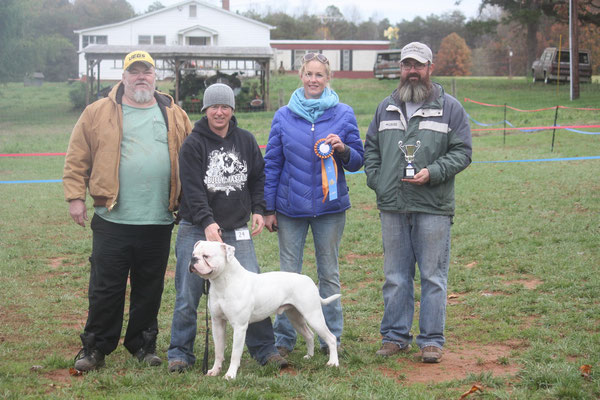 Guiness won 2 Best in Show at her first show! A great pup, so happy with this youngster!

After some time off from showing we return to see how the dogs measure up, I am proud to announce we are still on track!

Bully Rascalz Ch. Bulldog Bronco did AMAZING this weekend especially after breaking his toe a few weeks before the show!! Bronco went on to win ALL 3 Best Bully in Show and finishing with the BEST IN SHOW award for the whole weekend! Bronco is now DUAL CHAMPION! 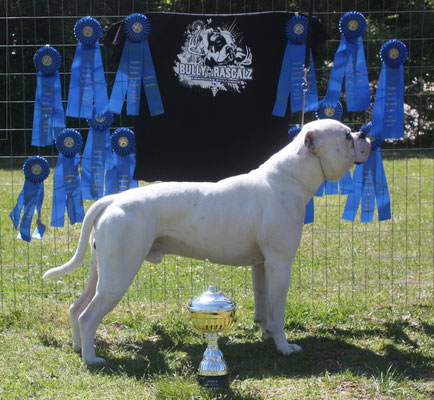 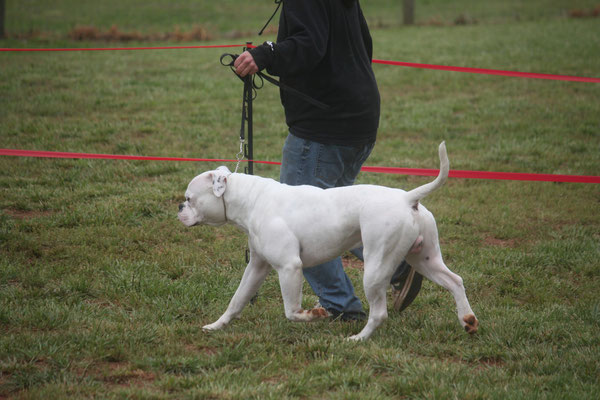 Bronco's son Noble did very well for his first show. He unfortunately missed the first show but won second place in his class the second show of the day and went on to win Best Bully Male puppy on the sunday! I am looking forward to watching this dog mature as he is only 7mths old! 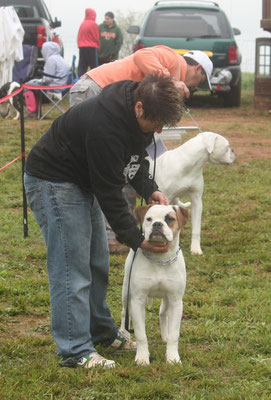 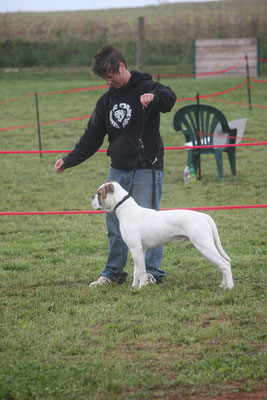 So proud of our little girl Mimic! Her first show at 16mths old and she rocked it! Following in daddy Shamrock's footsteps xox

Mimic won her class each show and went on to win Best Bully Female TWICE only being beat by our very own Bronco! She is only missing 30 points with the NKC to earn her championship title. 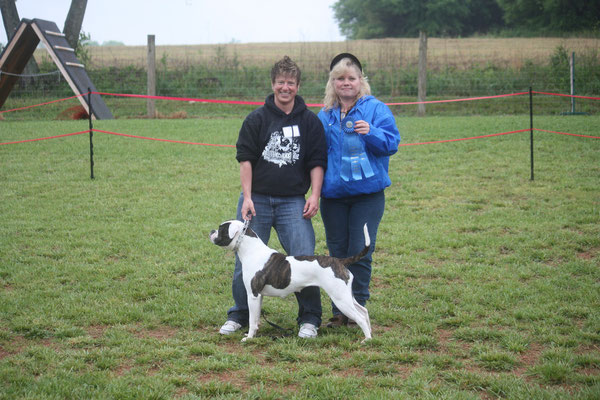 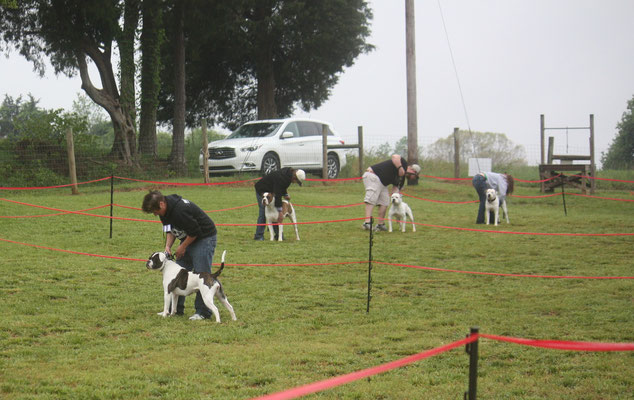 Last but not least we had to bring our standard type American bulldog in the land of the standards! Valor's Driving Force AKA Impulse did not disappoint and had a blast doing it! Impulse won 2 Best Standard Female in Show! 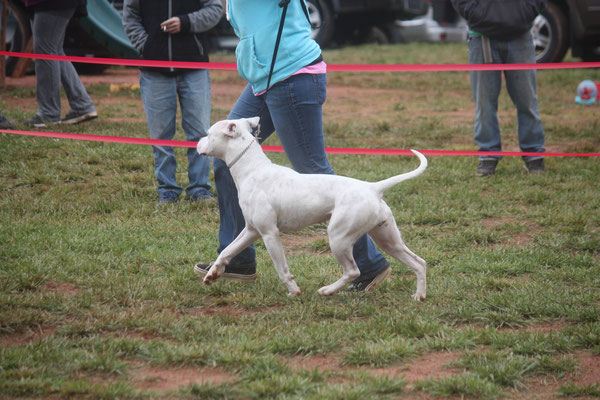 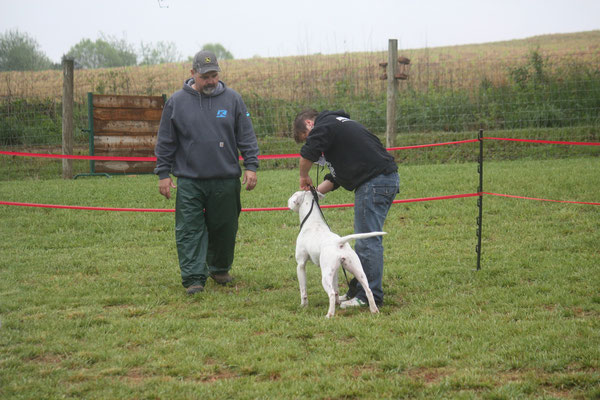 THE CREW DID GREAT! 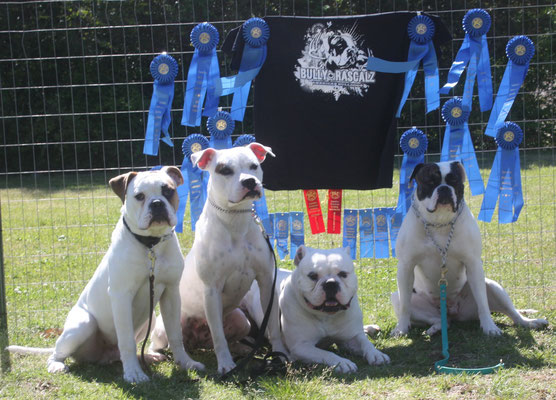 Bully Rascalz  returns to the show ring with a bang! We went to show off the dogs we are currently working with... still and always on the quest to breed the ultimate, healthy, functional and level headed American Bulldog!

Thank you to Julie Bingham for hosting such a great show, we had a blast. The site was clean and the show ran smoothly.

Shamrock of course did not dissapoint, the boy is a born show dog, he struts around the ring like he owns it. We had so many kind words complimenting Shamrock and his solid temperament. I am so proud to have produced this dog and hope to own many more like him. SHAMROCK TAKES 3 BEST IN SHOWS!!!

Shamrock also competed in his first Weightpull! He ended up short of about 150lbs to earn his title! We'll get it next time buddy!

Our young gun Bronco also did very well for his first time in the ring. He is out of Bully Rascalz Ch. Shady x KIWS Bulldog Blanco. He just turned a year old in September and had to go against a few older males in his catagory, his class had the biggest attendance at the show. He won his class a twice,won Best Classic male,won Best Classic and he won the other BEST IN SHOW!!! Meaning BULLY RASCALZ took all 4 Best In Shows at the Ohio Bulldog Bash!!!

Orka also did amazing for her first time placing in her class,best female,and Best Standard on 2 occasions! She is only missing 10pts to be a champion. She is a very big girl and just turned a year old so I expect her to still mature alot in the next year.

Our new standard baby girl did awesome at the show. Valor's Driving Force AKA Impulse took Best standard pup all 4shows! She really is a beauty and a wild child, harnessing her energy on the ring was our biggest challenge lol! She earned her Junior Champion AND 120 points!!!

Our other prospect puppy did her very best competing in the classic with her standard type body and we are very please with her results, she got a second place, a third place and a first place taking Best Classic female in 1 show. Rowe's Stack The Deck AKA Decklyn has alot of maturing to do, she is right in her goofy gangly growing stage!

Bully Rascalz When Sparks Fly AKA Kindle with my mom

Erica Mason did an outstanding job training Banks for his first Weightpull on rails earning him his Irondog Weightpull 1 title! So proud of you both!

What an exciting and fun weekend hosted by our good friends at DK's American Bulldogs in Toronto Ontario! Many bulldogs of all kinds were in attendance, the show was a great success.

Our superstar Shamrock did not dissapoint pulling yet again some major wins! He won 2 Best in Shows against notable competition which gave him the 2 legs he was missing towards his next title...

So without further ado....I would like to introduce you to the 3rd Grand Champion American Bulldog with the ABRA....Bully Rascalz Grand Champion Shamrock!!!!!

His son Sidekick also did very well, slowly following in his daddy's footsteps. He won a Best Classic Male in the first show, a second place in his class in the second show and he won another Best classic male in the third show!

Our boy Arko also did awesome! He sure was a crowd favorite as well with his freaky green eyes. He is only 1 major away from his champion title!

He won second place in his class in the first show, Best Classic in the second and Best Classic male in the third! He did fantastic for his first time in an adult ring, very proud of our muscle boy.

Another Shamrock production, young lady and up and comer Bully Rascalz lucky Charms also did very well at the show and promises to be a force to reckon with in the ring. Unfortunatly she was only able to show on the saturday. But she did win a first place in her class and went on to win a Best in Show puppy!!!! Congrats to proud owners Kevin and Tanya!

Shamrock's brother Linebacker also gets special mention winning a first and a second in his class, good job big boy!

We attended our second NKC show this weekend in Markham Ontario with great sucess! We showed Bully Rascalz Don't Push Your Luck AKA Shamrock and his son Bully Rascalz Sidekick.

Sidekick won Best male puppy age 3 to 6 months old twice on saturday and on sunday he also won that class but also went on to win Best classic Bully male puppy!!! He is only 3 months old...looks like he may follow in daddy's footsteps...

Shamrock did not dissapoint by stealing the whole show! He won his class...he beat all the males, beat the females earning him Best of Breed 3 times!!! Earning himself a new title of champion with the NKC making him now a dual champion!!!

Shamrock did not stop there...he than won BEST IN SHOW!!!  GOOD JOB SHAMMY!

WE HAD AN AWESOME WEEKEND IN QUEBEC!
Shady was amazing, I entered her in IDOB1 and she did fantastic...then for shits and gigles we did the off leash IDOB2 and she passed with flying colors even though she had never done off leash obedience and ranked second place! Then I was convinced by others to try IDOB3....she did it too!!! and ranked third place on scores! So proud of my Shady lady! :)

Huge... thanks to proud owner Hugo for also titling Mox in obedience, he got his IDOB 1, 2 and 3!

But the most important thing we went for this weekend was to do the weithpull and the dogs did not dissapoint!!!

Just for fun Alekeh got second in sprint race against a bunch of pitbulls :) lol! My crazy girl!

THANK YOU TO ETIENNE FOR THIS AWESOME EVENT! YOUR FAMILY AND HELPERS WERE FANTASTIC!!!

- Our little up and comers out of our litter of Spike x Shady did very well! Flex became a Jr Ch winning BIS puppy on Saturday, as well as Scandal and Rio, who won Best Standard Puppy!!

- Shamrock got a 1st place on Friday night, and then he got two 2nd places!

- Our crazy Alekeh and our sweet Shamrock did pretty well again at the show! Alekeh took one BIS puppy Saturday morning and her brother Shamrock won BIS puppy Sat afternoon and Sunday!!! We are so happy with the way they are turning out!

- We would also like to share our pride about one of our production, Masterbully's Full Throttle of Bully Rascalz, who won the Driviest Puppy, the Hardest Hitting competition and earned his WTE title under the NWDA at this show !!!

- We also are proud to announce that Masterbully's Full Throttle of Bully Rascalz earned his DHT title at the Gateway Classic, at only 10 months old!!!

- Anchor and Sadie's pups are born!! Lots of color and so far everyone is doing well!

- We are happy to announce that Masterbully's Full Throttle of Bully Rascalz (brother to Shamrock, Alekeh and Panga) passed his PH ! He came back .49/.41 !

- We just received Shamrock and Panga's Pennhip results!! Shamrock came back at .46/.50, we are very happy! Panga's results are .61/.63. , so we will restest her hips when she will be one year old.

- We are proud to announce that Bully Rascalz Shamrock became JR. CH. in only one show at 5.5 months!!!! Shamrock was produced here at Bully Rascalz, the future is bright for this awesome youngster!

- CH. Bully Rascalz Anchor's Away got his Obedience title with the NWDA this weekend!!! We are so happy, this boy is showing alot of potential and we worked hard to get this title!

- CH. Bully Rascalz Slim Shady got her Obedience title with the NWDA this weekend too! She was in full heat but she did great, we are very proud of our lovely girl and can't wait to see what she reserves to us in the future!

- CH Bully Rascalz Anchor's Away passed his test today for the CGN!!

- We were holding a show near of us and it was a great success, hope to see everybody again next year!!! We had a blast with you guys!

- CH. Bully Rascalz Anchor's Away won most weight-pulled in his class! He loves weight-pulling and we are expecting good things in the future with him!

- Our JR. CH. Bully Rascalz Anchor's Away earned his Champion status this weekend at 15 months old! The future is bright for our big boy!

- We are very proud to announce that Bully Rascalz Slim Shady became an ABRA Champion this weekend at 15 months old!